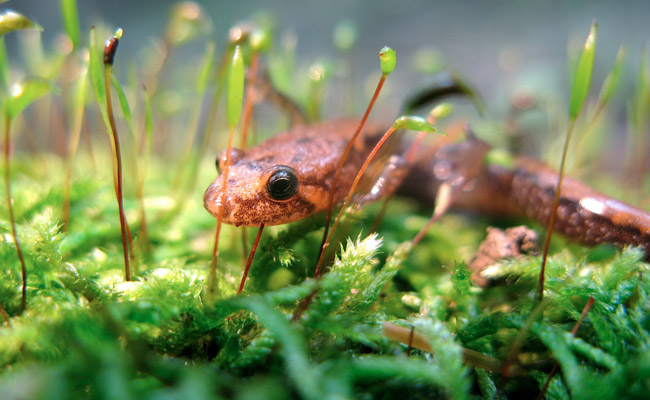 Researchers at Penn State University in the United States have taken a unique approach to climate change studies by studying its effects on salamanders, specifically the red-backed salamander. Salamanders breath through their skin just like all amphibians do. They require specific habitat conditions in order to survive. The red-backed salamander is one of the most common species in the eastern United States. Because they are so widespread through the land they function as one of the best indicators of forest health and are a good choice to study the effects of climate change.

The research was started in 2013 by David Muñoz, a student in the ecology graduate program, under the guidance of an associate professor of wildlife population ecology. Known as the Salamander Population and Adaptation Research Collaboration Network the project began as a partnership between several universities across the USA, but has grown into a network of 33 collaborators, some even in Canada.

To study the salamanders, the researchers utilize a method of mark and recapture. Captured salamanders are marked with a visual implant, a non-harmful dye injected into the skin that glows under ultraviolet light. Captures are done twice a year, once in the fall and again in the spring.

“One of the things we are interested in figuring out is, do they have any evidence of being locally adapted to the climate changes they experience across the range,” Muñoz said. For example, if the salamanders in Virginia are warm-adapted compared to those in Canada, it might be beneficial to introduce those genes to the Canadian populations when considering management options.

In addition to the mark and recapture there’s physiological research on this species. The physiological research is focused on elasticity in the salamanders. For example, if given time to acclimate, could they survive in a slightly higher temperature environment? These kind of experiments help show what the salamanders are capable of withstanding.